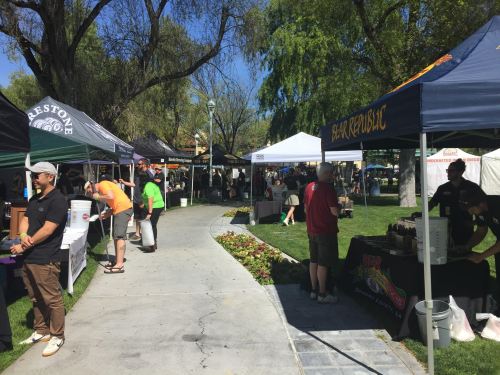 This last Saturday Todos Santos Plaza in downtown Concord was turned into a craft beer destination, if only for a day, thanks to The Brewing Network.

For the 8th year in a row The Brewing Network, a multimedia platform for everything beer and Brewing related, held their Spring Brews Fest on Saturday April 1, packing the downtown park with craft beer enthusiasts rocking their best brewery and beer attire and ready to see what the world of Craft Beer had to offer.  This years event was again a benefit for the TSBA Arts Foundation which funds the summer music program in Todos Santos Park as well as youth music programs around Concord.

Upon braving a line that wrapped down and around the downtown block, thousands of men and women walked through the temporarily erected gates and into a beer lovers paradise.  And with the sounds of live music and temperatures in the mid 70’s and plenty of sunshine those in attendance were treated to an all around sensory experience.

Every inch of walkway through the park was lined with pop up tents under which over 50 breweries had jockey boxes yielding multiple tap handles, ready to pour tasters of their offerings for their eager fans.

Walking in, the well known brewery logos of 21st Ammendment, Sierra Nevada, Lagunitas, Drakes and many more catch your eye. But upon further investigation, dozens of not as well known breweries (in this area at least) creep into view.  San Diego’s Societe Brewing, Oceanside’s Bagby Brewing and Corvallis Oregon’s Flat Tail Brewing are just a few in a list that neared 60.

Of course, not every brewery needed their name and logo on the top of their pop up to be easily found. To find Russian River Brewing Company all one had to do was look for the first and longest line in the festival, as you would expect, since they were pouring the famous Pliney The Elder Double IPA.

If you think the number of breweries in one spot is mind blowing, the selection of beers was simply baffling. While almost every brewery had an IPA on tap, (craft beer enthusiasts do love their hops) many also brought some of their “weirder and funkier” brews, such as Moylan’s Brewing Companies Grape Escape (a sour beer made with grapes that looked like someone added some cream to a glass of grape juice but was surprising tart and drinkable in the warm sun) and Moonlight Brewing’s No Hop Special Ale (a beer that just like it advertises is made without the addition of hops).

The event also boasted a number of food trucks and stands that ranged from brick oven pizza to barbecued meats to Tasty Zombies’ signature hot bread rolls filled with cheeses and meats.  And while the food wasn’t unlimited like the beer tastes, it was reasonably priced and a necessity to make it through such a large, 4 hour beer festival.

Once again The Brewing Network hit a home run with their Spring Brews Festival, an event that has become one of the best and most popular beer festivals in the Bay Area.

For more information about The Brewing Network, click here.