All across America thousands of chicks, bunnies and even ducks are dumped after Easter according to ASPCA.

They are dyed, terrorized by kids and killed a few days later. Sadly, most don’t even get put up for adoption. Baby chicks are drowned, flushed down the toilet and even adopted bunnies are released and left to fend for themselves in the wild.

Local animal rescue groups always see a spike in abandoned rabbits and chicks in the weeks following the spring holiday. “A big problem is that people get cute, fuzzy baby bunnies or chicks . . . at Easter and don’t always know what is involved. It’s a long-term commitment,” said an animal rescue volunteer.

“Rabbits can live about 10 years. Once they hit puberty, if they are not spayed or neutered, they turn into “raging hormonal bunnies” and can become territorial”, said another volunteer.

This is a pattern that has happened for years and it’s sadly it’s still going on, even here in Concord.

Below is a Craigslist ad put up yesterday from one Concord family who’s husband purchased the chicks from a local pet store, brought them home, and the family dyed them pink and blue. “We give them to our year old daughter as a toy” (their words not mine), said the women who adopted them out. 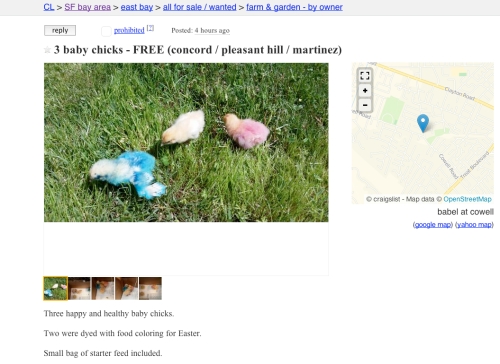 The chicks were dyed with food color she explained to me and given to our child as a novelty gift. One problem, these aren’t novelty items. They are living, breathing animals that trusted you to be good to them.

Some may think that dying chicks and bunnies is harmless fun, however, according The Center for Science in the Public Interest (CSPI) recently published a comprehensive report called “Food Dyes: A Rainbow of Risks” (pdf) which details the inherent risks of nine different dyes widely used in cooking. “New studies show that seven common food dyes contributed to cancer in lab animals, including brain and testicular tumors, colon cancer, and mutations” according to the article.

I can only imagine what happened after the chicks were dyed. Were they crammed into a plastic egg? Wrapped up in an Easter basket? Or were they a squeeze toy for a one year old?

After the “novelty” wore off, the family then choose to dump them on Craigslist for free to the first stranger that wanted them.

Luckily the first stranger that picked them up and adopted was from the DiabloReporter household. We were shocked by the condition that they were kept. They were left in a cardboard box crawling all over their own mess. The owners had a make shift light over the cardboard box on the cement floor. They failed to add a heated bulb so there’s was nothing to keep them warm in the drafty atrium type patio that they were left in. The chicks were even cold to the touch. There was even dye surrounding the chicks beaks, face and eyes.

These chicks will receive a bath to try and remove the remaining dye. We will get them into a clean cage with heated lamp and get medical care for them if needed. Then we will try to find them a suitable home and if not,  they will be added to the growing happy free range chicken and duck flock that resides on the DiabloReporter’s mini farm.

These chicks are the lucky ones.

You can help chicks and bunnies like these by sharing this post!!! Every person that see this is less likely to do repeat this awful pattern.

If you are interested in giving your child a chick or bunny experience during Easter, you can take them to pet store and let them interact with animals in a safe environment for free. You can also connect with friends and family that have chickens. In recent years there has been a spike in chicken ownership, in fact backyard chickens are quickly becoming the most popular pet. If you don’t know anyone, try a petting zoo or other facility.

Or give your kids a chocolate or stuffed bunny or chick, not a living, breathing one. You can also help spread the word that rabbits are not disposable pets by getting involved in the Make Mine Chocolate! campaign. Started in 2002 by the Columbus House Rabbit Society, the campaign aims to educate the public about the challenges of owning a rabbit and encourages parents to give chocolate or toy bunnies as Easter gifts instead of live rabbits. Check out the group’s website, MakeMineChocolate.org, for more info. 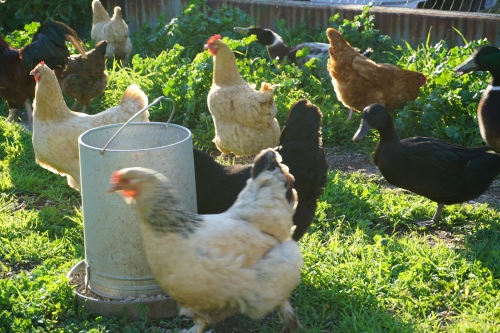 UPDATE: The chicks involved are happy healthy egg layers living peacefully in a green lush free range environment. They are now apart of a flock that includes both chickens and ducks! While these guys have a happy ending, many do not. Please take a moment to SHARE this post everywhere! It may save a life. Thank you!