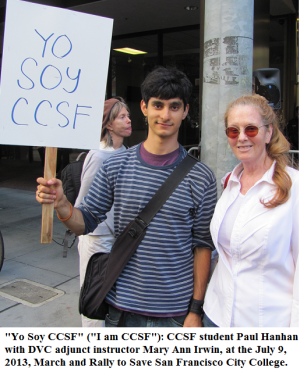 With the rising tuition costs, staggering decline in admissions leading to fewer graduates, millions of dollars in budget cutbacks, and teachers fighting for fair pay; our local community colleges are facing a new and even greater threat: Having their accreditation revoked.

This is precisely what happened to the City College of San Francisco.

The City College of San Francisco will have its accreditation terminated on July 31, 2014 for failing to correct a series of financial, management and governance problems. This action was taken by the Accrediting Commission for Community and Junior Colleges (ACCJC) on Wednesday July 3rd.

So what does this mean for Diablo Valley College? The same thing could happen to DVC, at any time. According to Irwin, “The ACCJC could decide tomorrow that DVC is being mismanaged because, for example, it wastes money on faculty benefits, or that it doesn’t have enough administrators, or that the faculty union is too powerful. If the ACCJC came after us tomorrow, we would be in the same fix as CCSF and its 85,000 students are in today.”

At the moment, ACCJC has placed about 25% of all California community colleges on some kind of sanction which is an incredible blow to an already strained educational system.

For more information or to get involved, please visit website of the American Association of University Professors. The AAUP is the most respected body of educators in the U.S. (possibly the world!). On July 8, 2013, the AAUP issued a statement in support of CCSF faculty, students, and staff. On July 9, 2013, the California Conference of the AAUP joined with other groups in calling for a federal investigation of the ACCJC.  For a very thorough explanation from Hank Reichman, the number 2 man at the AAUP, visit AcademeBlog.org.

Education is important to all of us! Let’s share this with everyone! Thank you for helping me get the word out!