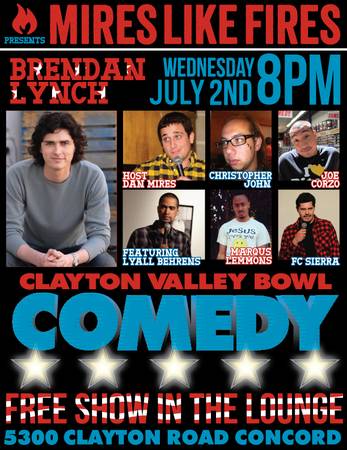 Every First Wednesday of the Month, Mires like Fires brings an amazingly hilarious FREE Comedy Showcase to the Lounge in Clayton Valley Bowl.

This months headliner is Brendan Lynch. Brendan took 2nd place in the 2013 SF International Comedy Competition and will be filming for Comedy Central later in the year. Come see him for FREE before you see him on TV!!!!

Show starts at 8pm in the Lounge of Clayton Valley Bowl. No tickets necessary just show up and take a seat!!