Matchbox Twenty and the Goo Goo Dolls are back on tour and both promoting new  albums. The 1990s pop-rock bands is scheduled to perform at The Sleep Train Pavilion on Saturday July 23, 2013. 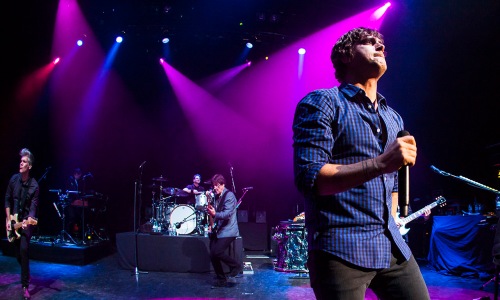 Matchbox Twenty Song Writer & Singer Rob Thomas, who is known for putting on a show is joined with  guitarists Kyle Cook and Paul Doucette added to the onstage liveliness with  energetic guitar solos and singing. Mr. Doucette  displayed his versatility on stage by lending his talents to guitar, rhythm drums and piano. The band balanced the show with well-known fan favorites including “How Far  We’ve Come,” “3 A.M.,” “Unwell,” “Bright Lights,” “If You’re Gone,” “Bent” and  “So Sad So Lonely.”

The Goo Goo Dolls will feature songs from its 10th studio  album “Magnetic,” which was released in June. But don’t worry the band has promised to dip into the  well-known and crowd-pleasing greatest hits list that included “Slide,” “Here Is  Gone,” “Let Love In,” “Better Days,” “Stay With You” and, of course, “Iris.”

As an added bonus the tour features “One Woman Army” singer Kate Earl. The native  of Anchorage, Alaska played a short set as the crowd began to pack up tailgates and trickle into the pavilion.

Tickets are now on sale in the $20-$95 range. Get tickets at StubHub.com, Sleep Train Box Office, and Ebay. There’s $20 Lawn Tickets available on Craiglist too.

Click here for more information about Matchbox Twenty, Goo Goo Dolls and Kate Earl. Check out these cool videos on the featured artists!

Who’s going? Who’s a fan? Got a favorite song or Pavilion memory?