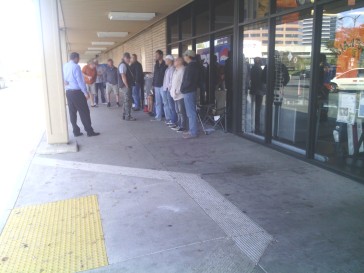 Faces blurred to protect the innocent.

This is a picture of the typical Friday morning in front of Big 5’s Sporting Goods store in Concord. Obviously it’s not black Friday but with a line like this (every Friday) it might as well be. This has been a regular scene for the last 16 weeks. In fact, the Diablo Reporter has been to Big 5 three times in an attempt at photographing the infamous line, each time arriving earlier and earlier. The store manager was over heard telling another curious customer, “We’ve been swamped. Once there is 20 people in line, we have opened our doors even if that means opening earlier than normal.”

Since Obama & Feinstein have launched their gun control stance and threaten new tighter laws on restricting firearms and ammo sales, there have been a few unexpected side effects. Gun store shelves were immediately cleaned out cleared out after the statements from President Obama and Senator Feinstein about gun control. Those going in to purchase firearms, found holes inventory and bare shelves. The high demand left online retailers and storefronts either sold out completely or charging outrageous prices for what little inventory is left. This is true for both firearms and ammo sales.

One customer patiently waiting in line to buy ammo for his soon to be restricted AR-15 says “Nothing makes people want something they do not necessarily need more than fear of never being able to get it, that’s why people are coming out in droves.”

GUN CONTROL SIDE EFFECTS
Big 5’s best sellers are the Bucket of Bullets which hold 1400 rounds of .22LR that sell out instantly and usually go to the first one or two, and occasionally a lucky third in line on Friday mornings. The run on ammo is so extreme that Big’s 5 has created a special store policy limiting purchases to a 5 box maximum per person. Aside from the rationing of ammunition, the gun control talk has also made finding 9mm, .40 caliber , .22LR, and .223 rounds very hard.

The National Rifle Association‘s member ranks have grown by 100,000 in a week after talks of gun control legislation from the White House after the December school shooting in Newtown, Conn. according to the Huffington Post.  An American non-profit organization (Oathkeepers) that advocates that its members (current and former U.S. military and law enforcement) disobey any orders that they are given if they believe they violate the Constitution of the United States has made their stance known. In response to Sandy Hook, Oathkeepers, has continued to offered free weapons training to any teacher across the U.S. (including the Bay Area) that want to learn how to protect themselves and their children.

In the weeks after the shooting, Fox News reported that the NRA was claiming an average of 8,000 new members a day which is still occurring  16 weeks later! However, the NRA isn’t the only business being affected. According to the Operations Manager for United Sportsman’s Gun Range (located on Evora Rd in Concord), they too have seen a high influx of new shooters and those going in for continued training. Even the local gunsmith, Trinity Gun Smithing (in Antioch)  is reporting that they have seen an “surge” in people wanting to get their old broken guns oiled and firing again.

THE PEOPLE FIGHT BACK
Protests have been the norm across the country as the gun control debate rages on. In New York on February 28, several thousand people, mostly white men, many dressed in hunting outfits and carrying American flags, filled the one square block park outside the Capitol. They expressed their anger against the recently enacted toughest in the nation gun control laws championed by Governor Cuomo and approved by the majority of state legislators. Protestors chanted “We will not comply” and “Cuomo must go” and most stated loudly and publicly that they would not obey provisions that will require them to register more types of guns and they encouraged others to do the same. 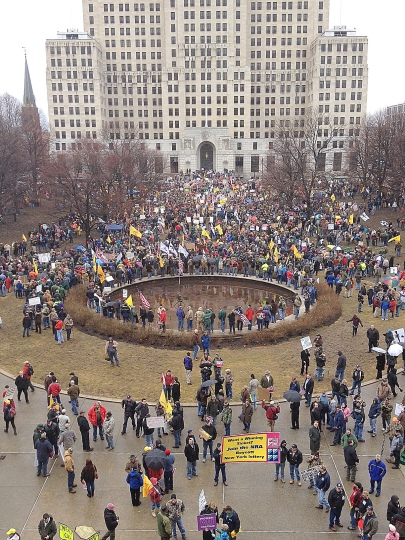 Leaving it to enterprising Americans to always find a loophole in the midst of ever-expanding government regulation, the government’s gun buyback program has since turned into a gun shows, all across the nation. While thousands of residents lined up for hours to trade in their handguns, rifles and family heirlooms away in exchange for up to $100 in gift cards as part of the government’s latest gun buyback program; gun collectors who have seen prices for so-called “assault weapons” and firearms accessories almost triple since November took advantage of a huge opportunity to out bid the police. A number of private buyers set up a makeshift gun show-style event and offered cold hard cash for guns and even lured customers with donuts and cookies. “I pay cash, I don’t give Amazon gift cards,” one dealer told a gun seller. In most cases, private citizens are going home with more guns than the agency running the buyback programs. 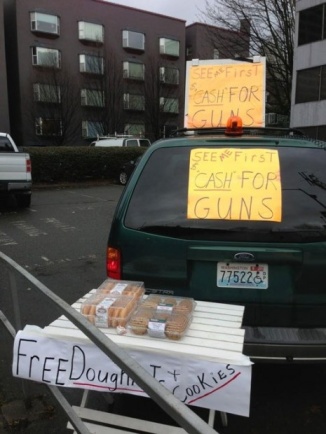 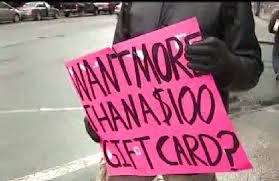 The protests, gun buyback auctions and recent gun shows all have one thing in common… lots of people creating long lines. Many gun show vendors have left gun shows half way through the show due to one big problem, not enough inventory to keep the booth open. 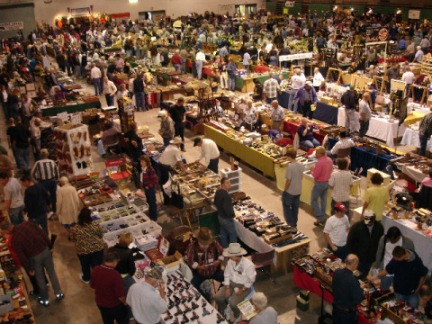 View inside a northern california gun show were thousands showed up.

Watch this NBC broadcast (click on the image below) on a recent attendance surge in an Orange Country gun show which hosted 20,000 attendees. It claims that despite the long lines to get in, that there “is no ammunition available in the Los Angeles area”. This seems to be a recent trend as we spoke with a Big 5 customer “Martin” who says “I’m not really into guns, I’m trying to find ammo for my cousin in Fresno. Ammo is really hard to find there. We are trying to get it where ever we can”. 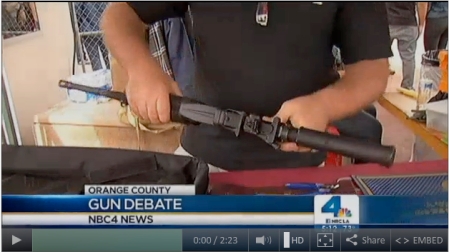 GUN COMPANIES FIGHTING BACK
More than 123 specialty manufacturers have opted to stop selling firearms and other gear to law enforcement in states and cities with strict firearms-control laws. Known as the Firearms Equality Movement, the goal is to limit law enforcement to the same armaments available legally to the average citizen as is police. To see the full list of companies that have joined the fight against restrictive gun laws, visit The Police Loophole, a website established to track “companies that have taken the step to publicly announce that they will not sell items to states, counties, cities, and municipalities that restrict their citizens’ rights to own them.”

Refusing to sell to law enforcement isn’t the only way that these gun companies are fighting back.  Some are leaving the state entirely and taking the jobs and economies created with them. Connecticut remains the seventh-largest producer of firearms in the country, (according to federal data) and stands to lose that title when many long-standing firearms manufacturers threaten to leave the state for good.  Colt, based in Connecticut since the 1800s, employs roughly 900 people in the state and is making plans to leave. In all, the industry employs about 2,000 people in Connecticut.

One of the biggest firearms manufacturers in the U.S. (Beretta) announced it may leave Maryland over a proposed gun control bill being considered by lawmakers. Magpul was the first Colorado manufacturer to announce plans to leave and was quickly followed by HiViz, a company that manufacture gun sights. This list like that of firearm sales and new gun owners will continue to grow.

So whether is panic buying, to hedge on inflation or just stocking up,  ammo and firearms have been on the top of the shopping list for Americans across the country for weeks now and the demand doesn’t seem to be slowing down anytime soon. As we left Big 5, the man working behind the ammo counter said, “It’s the worst run I have ever seen and that says something.”

This entry was posted in Antioch, Concord. Bookmark the permalink.